THE MAN BEHIND THE LEGEND 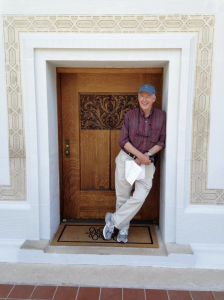 On October 19, bestselling author Paul Hendrickson will join us for an intimate evening in Wright’s living room to read select passages from his new biography “Plagued By Fire: The Dreams and Furies of Frank Lloyd Wright.”

As a teaser to this exclusive upcoming event, here’s an excerpt from a recent interview with Hendrickson, featured in the Fall 2019 issue of “Wright Angles,” a biannual publication produced by Frank Lloyd Wright Trust.

What first interested you in Frank Lloyd Wright as a subject of biography?

As told in the text, I grew up in the fifties in Kankakee, Illinois. As a nine-year old on my spanking-new J.C. Higgins three-speed, I used to pedal past the B. Harley Bradley House on my way to the ballpark down at the river. I actually lived on the same street—South Harrison Avenue—as the seminal Bradley (and its sister house next door, the Warren R. Hickox House). Something about the Bradley got into my consciousness—it’s all I can think now. I certainly knew nothing of Wright’s immense contradictions, of the uncounted storytelling possibilities his preposterous life would offer to a biographer. I was just a parochial kid on a bike with his ball glove hooked to his handlebars, staring over at this immense, beautiful, slightly scary, and strange-looking object. (Did the house come down from Mars?) Well, I am a slow learner, or metabolizer, so it only took another six decades or so for Wright to loop around and find me as a writing project. Which, by the way, is one of my core theorems about writing: we don’t find our subjects; they find us.

You quote Wright as writing the following: “To cut ambiguity short: there never was exterior influence upon my work, either foreign or native. . . .My work is original not only in fact but in spiritual fiber.” Do you think there was a singular influence on his work? If so, where do you think this is most evident?

I’d suggest he is protesting a little too loudly. There were many influences. I’ll speak of two. J. Lyman Silsbee, where he landed his first lowly job in Chicago, is a greatly under-valued influence on him professionally, in my opinion. He spent only eight or nine or ten months at Silsbee’s small residential architectural firm, but he learned there about the art of flow. Not too long after, Wright took that absorbed lesson over to Adler & Sullivan. Again, to oversimplify, and as told in the text: if Silsbee taught him about not getting hemmed in with your designs, the great Louis Sullivan—from whom Wright learned more about architecture than any other person in his life—showed him how to bring everything together, and to provide a philosophical underpinning, so that the emerging design could become a single architectural idea: the all-inclusive structure of utility and beauty. One other point here: Sullivan was always way out ahead of the pupil on the gospel of creating American architecture for Americans. Wright gets way too much credit for the idea, not that he didn’t believe in the gospel to his toenails or eventually understand it in deeper ways than his mentor and raise it to far more brilliant levels. But the dream didn’t originate with hm. Again, as said in the text, just one more instance of the ultra-smooth appropriating.

What or who had the greatest influence on his personal life?

I’ll go for a wildcard here. Certainly, his mother, with her ruthless will. Certainly, his failed father with his dignity and array of talents and ingrained vision of himself as an artist (albeit a never to be sufficiently recognized artist). Certainly, his maternal uncle, Rev. Jenkin Lloyd Jones, one of the great figures in all of late Nineteenth Century and early Twentieth Century Unitarianism, with his rhetorical and sartorial and intellectual gift for projecting himself directly into the imaginations and sub-consciences of his listeners. But, somehow, above all of these, at least if we are speaking of personal influences, I would choose Cecil S. Corwin, his earliest Chicago friend. It’s why I have spent an entire chapter of perhaps 15,000 words—and doing so early in the narrative—on the person whom I think of bittersweetly as “The Lost Architect.” Cecil helped open up the Wisconsin hayseed to the wider world and all of its sensuous big-city possibilities and opportunities. As said in the text: I contend that this intellectual and spiritual and emotional opening up, in all its forms and phases, with Cecil showing the way, and never more so than in their first days and weeks and months together in Chicago, had its own unquantifiable influence on the creation of some opened-up and aired-out buildings that, within little more than a decade of the hayseed’s arrival, would be standing American architecture—world architecture—on its drawing head. So, of course, the question of “personal” here slides right into professional. To my mind, Wright through all his life felt a solidarity and kinship with Cecil, a deep gratitude, a love of its own kind. Love and gratitude for all Cecil gave him when he’d been so young and inexperienced and know-nothing hungry to the world.

Can you speak to the title. What role did fires have in Wright’s life?

I can speak to it only in this sense: it is just an abiding mystery. As one of his old apprentices said to me, Wright somehow just attracted fire. Everybody knows about the small holocaust of murder and inferno at Taliesin on August 15, 1914. But fires of varying destruction and fury, from very small to tragically large, came down on Wright’s life—get this—in: 1925, 1927, 1929, 1932, 1937, 1952, 1954. Even after he was dead, it was as if fire wouldn’t leave him alone: In the early sixties there were three destructive blazes at Taliesin in Arizona in less than three years. But it was never my intention in this book to try to find and spreadsheet every fire. Fire became the leitmotif, the thing under the story always licking at its frames and forms. Again, the why of so many fires—that’s God’s truth, God’s answer. But as the man himself once said, “All my life I have been plagued by fire.” Yes.

Interested in learning more about what Hendrickson discovered via his extensive research? His upcoming author reading at Taliesin will be begin with a wine and cheese reception at 5pm—plus each guest to RSVP by October 5 will be entered into a drawing to win a FREE autographed copy! Visit taliesinpreservation.org/event/paul-hendrickson-book-reading-reception/ for more info.