Taliesin and Dept. of Natural Resources Partner on Study

Taliesin Preservation and The Frank Lloyd Wright Foundation are partnering with the Wisconsin Department of Natural Resources in their Southwest Wisconsin Deer and Predator Study. 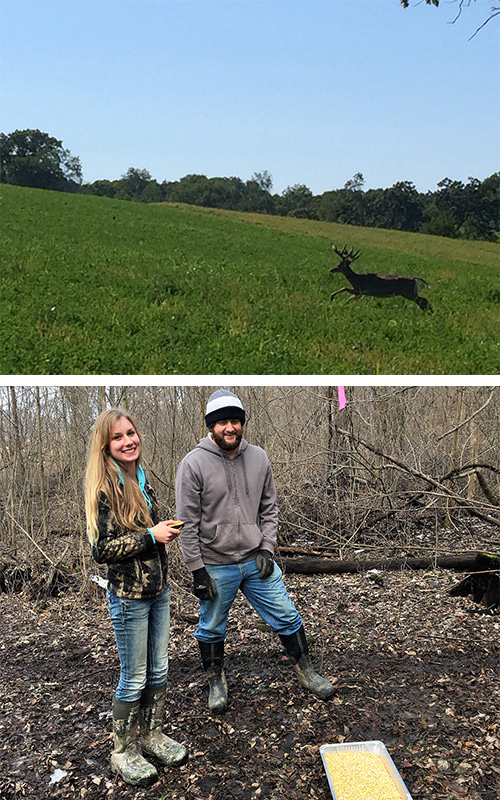 Top: A buck leaps through the fields near the Taliesin orchard.
Bottom: Wes Ellarson Dana Jarosinski and of the Wisconsin Department of Natural Resources prepare a deer trap site with corn.

Deer research crews capture deer using a variety of methods such as box traps and drop nets. Once captured, researchers take tissue samples, health measurements, and equip the animals with GPS collars before releasing them back into the wild.

The goals of the project are to measure survival rate of deer and record causes of death due to predators, hunting, and other factors; gather data on deer health such as Chronic Wasting Disease rates, pregnancy rates, litter size, nutritional condition and more; and to gather information on food availability as it relates to deer nutrition

Trapping will occur in February 2017. After approximately 12 deer are trapped and collared, DNR staff will track the animals and handle data management remotely.

The Taliesin cellars and caves continue to be a sanctuary for healthy big brown bats (Eptesicus fuscus), a threatened species in Wisconsin. A survey last week by Jennifer Redell, Cave and Mine Specialist at the Wisconsin Department of Natural Resources, confirmed the number and health of the hibernating bat population in our cellars and caves. The DNR has surveyed these big brown bats at Taliesin for the past three years.

The big brown bats at Taliesin are a species of bats that hibernate in places that are colder and drier than those selected by other bats more vulnerable to white-nose syndrome. Survey numbers here seem to bear this out as our hibernating bat population has remained steady at about 70 individuals each of the last three years. The disease has not been detected here at Taliesin or in the big brown bat population, in general. 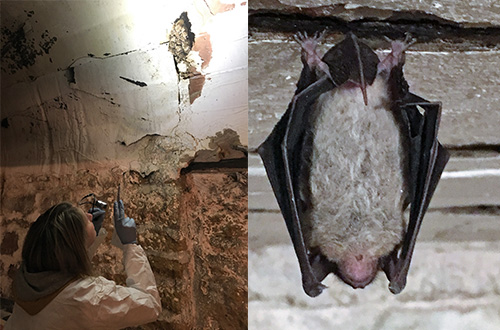 Left: Bats hibernate in clusters such as this in Taliesin’s caves and cellars. Right: The bats are evaluated for white-nose syndrome, which has decimated the state’s bat population.