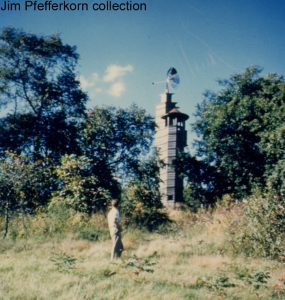 25 free architecture books from the MIT press available online. These books include John Ruskin’s “The Stones of Venice” and the “Seven Lamps of Architecture” (two books mentioned by Wright), as well as books on Japanese architecture among others. It will give you plenty to read!

Information on Eleanore Pettersen (1916-2003) from the International Archive of Women in Architecture. She was an apprentice of Wright’s from 1941-43 and would become the first licensed female architect in New Jersey. Pettersen ran her architecture practice in the state for 50 years.

After receiving the Guggenheim museum commission in 1943, Wright made a flurry of changes to Taliesin. This was perhaps in order to entice the new client, who the architect had invited. One change occurred at the edge of Taliesin’s living room: the architect shifted French doors east in the room, into an alcove. Wright later extended the room again—encompassing all of the pre-existing stone terrace (and that terrace now goes to Taliesin’s Birdwalk). Those who come to Taliesin can see the vertical breaks in the stone as Wright moved the door frame. It appears that Wright often kept hints of the changes he made to Taliesin; although it also may simply be because he was changing things so frequently.

The most noticeable break in the stone in this alcove comes where one turns a corner to the right—or the south—just before seeing the newly discovered window (the same window shown in the photograph in last week’s Historian’s Corner). And the vertical line is visible around the corner from the square table in that photograph.