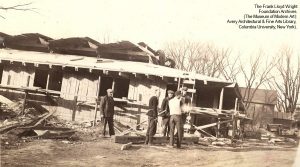 An image of the Hillside Drafting Studio in late fall during construction (likely taken in 1932). The studio was completed in 1939 and Wright moved drafting operations there that summer. Due to World War II, Wright had to move studio work to Taliesin. However, all commissions after World War II were done at Hillside in Wisconsin. The men in the photograph may be apprentices in the Taliesin Fellowship. [Property: The Frank Lloyd Wright Foundation Archives (The Museum of Modern Art | Avery Architectural & Fine Arts Library, Columbia University, New York).]

Just a short drive down the road from Taliesin, on the outskirts Baraboo, WI, stands one of the largest scrap metal sculptures in the world: Forevertron.

A profile on Robert Green, one of Wright’s last architectural apprentices: atlantamagazine.com/homeandgarden/robert-green-atlantas-forgotten-master-modern-architecture/

The west side of the Hillside drafting studio (the photograph above shows the east side) was restored and preserved in 1995-96 by Taliesin Preservation. During the preservation work, it was discovered that some of the floor joists had originally been made with “wet” wood. That means the wood was not properly dried before it was used. The decision was made to repeat this same technique since Frank Lloyd Wright used the whole estate as an experiment and the construction of the studio as a teaching tool for new architectural apprentices.