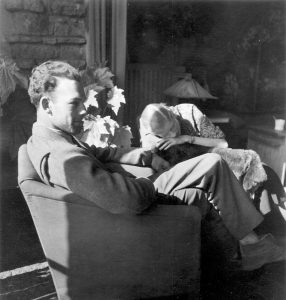 Wright apprentice—and eventual architect—John Lautner along with his wife, Marybud, inside of the room at Taliesin known as “the Loggia”. This photograph was taken in 1936 by Edmund Teske as Lautner was in the Taliesin Fellowship for six years (1933-39). As he went on to practice in Southern California, his work has appeared in movies, such as The Big Lebowski, Diamonds Are Forever and Lethal Weapon 2 as referenced in a website link below. Image owned by The Frank Lloyd Wright Foundation Archives (The Museum of Modern Art | Avery Architectural & Fine Arts Library, Columbia University, New York).

The website of Arthur Dyson, a former Wright  apprentice, award-winning architect and the 2018 Shining Brow honoree, showcases how organic design still resonates with consumers in the modern era: arthurdyson.com.

Dyson also studied under Bruce Goff, a 20th century architect (1904-82) unaffiliated with Wright, but equally respected In the field due to his fascinating designs. And The New York Times Style Magazine covered a collection of his work in this feature article last year.

PUBLICATIONS WORTH PERUSING:
Books related to the Wright’s Taliesin Fellowship (Part I)

“At Taliesin: Newspaper Columns by Frank Lloyd Wright and the Taliesin Fellowship, 1934-1937,” compiled by Randolph Henning.
Written by fellowship apprentices and Wright himself, these articles were originally published in newspapers and reveal the early years of the fellowship as told from the perspective of those most intimately involved. If you’re curious why 20-somethings would move out to an isolated little town in Wisconsin with a man old enough to be their grandfather (whom also had not built anything in a decade at that point) then this is the book for you. Another bonus is it contains rare photographs found almost nowhere else.

“The Fellowship: The Untold Story of Frank Lloyd Wright’s Taliesin Fellowship,” by Roger Friedland and Harold Zellman.
The good thing about this read is that the two authors did not come to the subject matter with any pre-conceived notions. The portrait that is created, however, does engender strong feelings from Wright fans and critics alike—an interesting juxtaposition to other works penned by Taliesin Fellows chronicling their own lives with Frank Lloyd Wright.

“Picturing Wright,” by Pedro Guerrero.
Guerrero was Wright’s personal photographer and an apprentice for a year. Besides containing beautiful photographs of Taliesin, Taliesin West, and other Wright structures, it contains Guerrero’s delightful narrative. It’s obvious that Guerrero had a sly sense of humor and one gets a unique perspective on Frank Lloyd Wright and his wife, Olgivanna.

“Tales of Taliesin,” by Cornelia Brierly.
Having started in 1934, Cornelia was one of the first apprentices and remained in the fellowship until she died in 2012 (at the age of 99). Her stories and remembrances are often humorous—several of which, along with an assortment of historical images, are solely available in this book.

“A Taliesin Diary: A Year with Frank Lloyd Wright,” by Priscilla Henken.
This was a diary kept by Priscilla Henken while she lived at Taliesin with her husband, David, in 1942-43. Priscilla’s day-by-day observations give a unique perspective on the Fellowship, Wright, and his family; most other books of this nature were written years afterward. Plus the book, written during World War II, reveals via candid photos and engaging text how the group fared with food, work, and the military draft in the early 1940s.