Notable woman Frank Lloyd Wright knew personally and professionally will be highlighted for the remainder of 2020 via Murphy’s blog. In honor of Women’s History Month, the series begins with reflections about several of Wright’s female familial connections.

Wright wrote that before her marriage, Anna “became a teacher in the countryside, riding a horse over the hills and through the woods to and from her school each day.” [Frank Lloyd Wright. An Autobiography in Frank Lloyd Wright Collected Writings, volume 2: 1930-32. Edited by Bruce Brooks Pfeiffer, introduction by Kenneth Frampton (1992; Rizzoli International Publications, Inc., New York City, 1992), 108.]

Most importantly for Wright, while the family lived in Massachusetts, Anna discovered the Froebel Gifts at the Philadelphia Centennial Exposition in 1876. An essential part of the new kindergarten method of teaching, Anna enrolled in classes in nearby Boston, to learn how to use them with her children. Invented by Friedrich Froebel, the Froebel Gifts were educational toys meant to teach children about nature’s underlying geometries. In his autobiography, the architect wrote that “The smooth shapely maple blocks” of the Gifts, would “never afterward” leave his fingers, “so form, became feeling….” [Frank Lloyd Wright, 111.]

Wright designed three buildings for the aunts’ school: the Home Building in 1887 (a Queen Anne Style building with dormitory rooms and parlors); the Romeo and Juliet Windmill Tower in 1896 (finished the next year); and the Hillside Home School structure, the “stone building”, with classrooms, an assembly hall and a gymnasium (designed: 1901; completed: 1903).

About his aunts, he wrote, “These great women possessed such individuality and to such a degree that, where they were, where was consequential order out of insignificance—the usefulness of even the interior object, atmosphere, warmth and light out of nothing.” [Frank Lloyd Wright, Collected Writings, volume 4, 126.]

Touchingly, one photograph taken in 1955 by Maynard Parker for that November’s issue of House Beautiful (but not published) has Wright’s bedroom and work desk. The top of his desk shows is a photograph of his mother sitting with her sisters, his aunts.

She and her husband, Andrew Porter, commissioned their home, “Tan-y-deri”, across the hill from Taliesin. Based on Wright’s design for “A Fireproof House for $5,000”, the Porter family lived in their home across from Wright for decades. Their son, Franklin, sold Tan-y-deri to his uncle in 1955.

In addition, Jane was a force behind Wright’s design for the Women’s Building built in 1914 for the Inter-County Fair in Spring Green (the building was destroyed by the mid-1920s).

(A photograph of the Women’s Building courtesy Jonathan Lipman)

Illustrated more than 40 children’s books, produced covers for “Women’s World”, and had work in the following magazines: “Collier’s”, “McClure’s”, “Good Housekeeping”, “The Ladies’ Home Journal”, and “The Woman’s Home Companion”.

In the 1930s, Maginel began developing a style of embroidery that she called “long-point” (not petit point): pieces of yarn became like long strokes of paint to create compositions. She would work on these pieces in the summer while visiting her sister at Tan-y-Deri (across the hill from Taliesin). Her brother and sister-in-law (Olgivanna Lloyd Wright) each had some of her pieces at Taliesin. The photograph below, taken in Wright’s bedroom, shows that he had a piece across from his desk. Her piece is on the left and his desk is on the right. 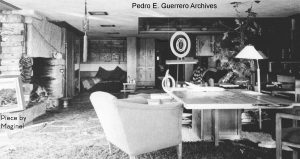 Maginel (under the name Maginel Wright Barney) wrote The Valley of the God-Almighty Joneses about the mother’s side of the family. As the book also delved into Maginel’s own history, she described an event that took place during a thunderstorm in Oak Park, Illinois when she was 10 or 11 years old (she and her mother lived next door to her brother’s home):

Possessed by the unreasoning fear of a child, I trembled in an upstairs room, as the wind shook the trees and lighting played above the roof…. Then Frank was beside me…. “Don’t be afraid, Maginel,” he whispered. “Don’t you know that nobody’s going to hurt a little sis like you?” He stayed with me until I fell asleep. I never forgot the reassurance of his strong presence. [Maginel Wright Barney, Valley of the God-Almighty Joneses: Reminiscences of Frank Lloyd Wright’s Sister (Appleton-Century Press, New York City, 1965), p. 20.]

Maginel’s daughter Elizabeth (“Bitsy”) was a children’s book author who won a Newbury award in 1939 for the fictional book, Thimble Summer (Farrar & Rinehart, 1938). The setting for this book was inspired by the valley of the Taliesin estate.

The photograph below shows Bitsy with her son, Nicky, in Taliesin’s “Work Court” apparently making wine. Nicky was born in 1932, so Bitsy might have been working on Thimble Summer at the time this photograph was taken! 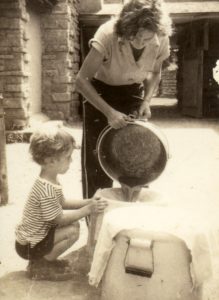 Academy-award winning actress and granddaughter through Frank Lloyd Wright’s oldest daughter, Catherine Wright Baxter. Owing to her father’s departure when she was a teenager, Catherine didn’t introduce Anne to her grandfather until Anne was 16 years old. However, the two appreciated each other very much. Anne visited him at both Taliesins (mostly Arizona, but also Wisconsin) and they exchanged Christmas and birthday gifts. Here’s Anne discussing her grandfather:

He taught me to mistrust facades and always to observe life beneath the surfaces; to find excitement in a seed pod or beauty in a carpenter’s hammer. He gave me other, inner eyes. I gave him pleasure as a lively audience….

[Anne described going to Taliesin West shortly before his death]

… There he came, arm in arm with my step-grandmother [Olgivanna Lloyd Wright]…. Though almost 92, he walked with small panther-smooth steps, the most graceful man I ever knew. He was dressed in white linen, a dashing soft-brimmed straw hat shaded his merry eyes, and he exuded geniality and delight.

We greeted one another with joy. The quality of our time together had been matchless, and we both savored that rare fact. [Patrick Meehan, ed., Frank Lloyd Wright Remembered (Preservation Trust, National Trust for Historic Preservation, Washington, D.C., 1991), p. 540-41, p. 242.]

Forthcoming historical posts this year will continue to spotlight other women that played a significant role in Frank Lloyd Wright’s life and career. 2020 is also the commemoration of the 19th Amendment (ratified on August 18, 1920) in the United States guaranteeing women’s right to vote. For more information on this milestone and how it correlates to American woman and architecture, check out “Where Women Made History” from the National Trust for Historic Preservation.