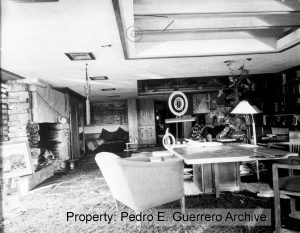 Photograph of Frank Lloyd Wright’s bedroom in 1952. Looking north in the room with Wright’s desk in the foreground and his bed against the wall (on the left in the background beneath a Japanese screen). Research has determined that the mobiles which can be seen were not by Alexander Calder— the two men never met. Coincidentally, although Frank Lloyd Wright and Alexander Calder never met, both men did work with Pedro Guerrero—the photographer whom captured this image as well as photographs of many sculptures by “Sandy.” (Photograph property of the Pedro E. Guerrero Archive.)

The 28-minute interview includes footage filmed in Wright’s personal bedroom on the Taliesin estate in Wisconsin (A screen is viewable on the wall behind Downs as he is speaking to Wright.) Wright discusses the early years, the name “Taliesin,” designing Fallingwater, and his relationship with the press.

THE TALIESIN FELLOWSHIP/SCHOOL OF ARCHITECTURE

WRIGHT BOOKS TO PUT IN YOUR LIBRARY

By the 1950s, Wright wrote these books seemingly to share his thoughts on architecture, living, and building with a broader audience. All of the books below are also compiled in “Frank Lloyd Wright: Collected Writings, v. 5,” 1949-59.

“The Future of Architecture.” (1953): A collection of previously published work including the “A Conversation with Hugh Downs” broadcast May 17, 1953. Can be found in libraries as well as used and standard bookstores in both hardcover and paperback.

“The Natural House.” (1954): Wright explained the practicalities of designing a home. He explores deciding where to build, what type of land one should purchase, information about foundations, how to bring light into the house and much more. Copies can be obtained from a library.

“A Testament.”( 1957): Wright delves into his beliefs and principles interwoven with a brief biography. Available via libraries plus used and standard bookstores.

“The Living City.” (1958): Wright’s third book on urban planning provides insight on the architect’s ideas on the “Broadacre City” concept as revisited in the late 1950s. Broadacre City was the concept that each person should be given an acre of land on which to live in communities with individually designed homes (like the homes he writes about in “The Natural House”). Also available via bookstores and libraries.