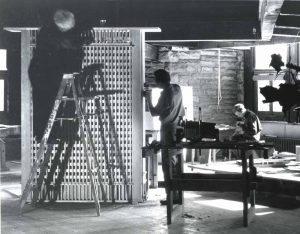 A photograph of apprentices in the Taliesin Fellowship working on the model for Wright’s unbuilt project, the “Call Building”. They were photographed by Pedro Guerrero in the Hillside Assembly Hall in 1940. (Property of the Pedro E. Guerrero Archives.)

TRENDING ONLINE
Architizer’s round up of “7 Iconic Examples of Unbuilt Architecture Throughout History” that includes Wright’s “Automobile Objective and Planetarium.” architizer.com/blog/inspiration/industry/what-if/

FOUR WRIGHT BOOKS TO PUT IN YOUR LIBRARY:
“In the Nature of Materials, 1887-1941: The Buildings of Frank Lloyd Wright,” by Henry-Russell Hitchcock.
The first major overview of Wright’s architecture featuring a chronology of his career, along with photographs and floor plans of buildings. It’s a standard volume for Wright fans to possess. Available via library systems as well as used and standard bookstores.

“The Architecture of Frank Lloyd Wright,” by Neil Levine.
An in-depth chronological examination of Wright’s work, including Taliesin. Levine, a respected architectural historian from Harvard, was adamant about publishing this book despite being reminded repeatedly the aforementioned book by Hitchcock had already been in print for forty years. (Hardcover and paperback editions can be found in libraries and bookstores.)

“Frank Lloyd Wright: The Lost Years, 1910-1922: A Study of Influence,” by Anthony Alofsin.
This book by architect, writer, critic, and architectural historian Alofsin examined Wright’s influences during the seminal years after Wright left Oak Park—and was designing in Japan and California. In hardcover and paperback, Alfosin’s retrospective has been acknowledged as one of the most important books on Wright since his death in 1959.

“Lost Wright: Frank Lloyd Wright’s Vanished Masterpieces,” by Carla Lind.
“This is what happens when you leave a work of art out in the rain,” Wright’s sister-in-law is quoted having said while grabbing a bucket to catch ceiling drips at her home, Westhope—a house located in Tulsa, OK that Wright had originally built for his cousin, Richard Lloyd Jones. And since over 1 in 5 buildings by Wright have been destroyed due to accident, natural disaster, or development, author Lind explores many of these sites with photographs and essays.