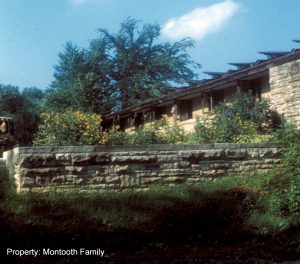 A photograph taken by Wright apprentice Charles Montooth in July 1952. The view is of the western corridor of dorm rooms at the Hillside Drafting Studio on the Taliesin estate. The dormitory rooms are marked by the open windows. The roof of the studio is under the clerestories and look like the edge of a serrated knife. The yellow and blue piece on the left was acquired by Wright in New York City and is from China. (Property: Montooth family)

WRIGHT BOOKS FOR YOUR LIBRARY

“Building the Pauson House: The Letters of Frank Lloyd Wright and Rose Pauson,“ by Allan Wright Green. The Rose Pauson house is a greatly lamented structure that lasted less than two years. After it was completed in 1941, it suffered a devastating fire the next year.

“Frank Lloyd Wright’s Penwern: A Summer Estate,” by Mark Hertzberg. Written about the Penwern estate in Delavan, WI which includes the rebuilt boathouse.

“Frank Lloyd Wright’s Larkin Building: Myth and Fact,” by Jack Quinan. An examination and history of the Larkin building in Buffalo from its inception to its demolition.