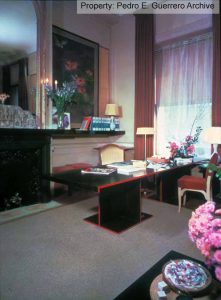 Wright designed new furniture for his rooms at the Plaza Hotel in New York City and made other modifications (among these are the curtains seen in the photograph). Wright had a portrait of his mother in the room; it can be seen on the same shelf that has the vase of lilies against the wall. Wright designed furniture for the suite (visible on the black table). It and other Wright-designed pieces for the hotel are covered in black lacquer with red edges. Another example of furniture he designed is on the Taliesin estate inside the Dana Gallery at the Hillside Studio and Theater.

(*A note about Frank Lloyd Wright and Taliesin: While Wright’s home in Arizona is Taliesin West, Wright never referred to his home in Wisconsin as “Taliesin East”. Wright referred to his home in Wisconsin as just Taliesin, or as “Taliesin North”. “Taliesin East” is the name he gave to another living space of his: a suite of rooms in which he would stay at the Plaza while working on the Guggenheim Museum in the 1950s. The photograph above shows one of Wright’s rooms at the Plaza, taken by his personal photographer, Pedro Guerrero. More of Guerrero’s photographs can be found at: guerrerophoto.com/portfolio/plaza-hotel/)

Frank Lloyd Wright’s 1905 photographs of Japan are included in the collection of the Frank Lloyd Wright Trust. Experience Japanese culture through the eyes of the renowned architect whom was inspired by Japan for over a decade.  wrightsjapan1905.org

“The Japanese Print: An Interpretation” by Frank Lloyd Wright. Wright wrote quite in depth regarding his feelings about Japan in his autobiography, but he also twenty years before described why the prints and culture of Japan were important to him in this book. To come across an original edition nowadays is somewhat of a rare occurrence, but this work is also included in “Frank Lloyd Wright: Collected Writings, v. 1.” Both books are available at libraries and used bookstores.

“Frank Lloyd Wright’s Fifty Views of Japan“, by Frank Lloyd Wright Preservation Trust. This is the book with the reproductions of Wright’s photographs from Japan (referenced above in Trending Online). It also has essays which highlight Wright as a collector and photographer, in addition to the locales shown in the images he took. The book is available at libraries and used bookstores.