How We're Handling COVID-19:
The 2020 Taliesin Tour Season is delayed until May 1, 2020. Please read more about how we're handling the COVID-19 outbreak here and check back for updates as the situation evolves. 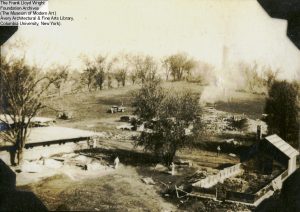 Photograph taken by Taliesin Fellowship apprentice William “Beye” Fyfe, an apprentice under Frank Lloyd Wright from summer 1932 to October 1934. The Hillside Drafting Studio (with dormitory rooms at the double windows) is on the left. To the lower right is the old greenhouse and conservatory used by Wright’s aunts’ school Hillside Home School, which was in the process of demolition. The Frank Lloyd Wright Foundation Archives (The Museum of Modern Art | Avery Architectural & Fine Arts Library, Columbia University, New York).

Delve into the life of Samuel Mockbee, an American architect who was born and died in December, co-founded the Auburn University Rural Studio program. While he never studied at Taliesin, his ideas about sustainable, affordable housing coupled with a curriculum centered on students “learning by doing” are reminiscent of Frank Lloyd Wright’s ideas on architecture.

Watch this video tour of a house by architect A. Quincy Jones. The head draftsman on the home was Wright apprentice Jim Charlton. The clip shows a lot of the potential in Wright’s ideas: youtube.com/watch?v=Ls3WvDpTAOs