One lane of the Highway 23 bridge will open on Saturday, June 12. Highway 14 will also be closed in Mazomanie, please allow extra time for this detour. See the hours and directions page for more information. 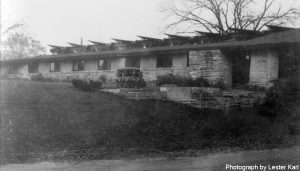 Fall photograph looking northeast at Wright’s Hillside drafting studio on the Taliesin estate. The bowl left of center was purchased by Wright in 1947 at French & Co. It is Chinese and was a centerpiece of the new walls that Wright added. The rectangular windows in the background are the dormitory windows. There are eight dorm rooms on either side of the Hillside studio. The rooms are still occupied by School of Architecture at Taliesin (SOAT) students during their summer sessions on the estate.

TRENDING ONLINE:
What apparatus can produce a document in standard type with a color palette almost on par with a laser printer? Answer: A Chromatic typewriter!

TALIESIN FELLOWSHIP/SCHOOL OF ARCHITECTURE AT TALIESIN
Elizabeth Wright Ingraham (1922-2013) was the daughter of John Lloyd Wright, Wright’s second child (who was also an architect). She lived at Taliesin during the summer of 1937, plus later became a practicing architect in Colorado. Learn more about this talented women’s tale in this Curbed article: curbed.com/2017/8/28/16204924/elizabeth-wright-ingraham-midcentury-modern-architect-colorado

FINDS AT TALIESIN:
Wright wanted an inscription carved into the rectangular stone to the right of the Chinese bowl. This was done by apprentice Curtis Besinger (Taliesin Fellowship, 1939-55). The stone says, “TO AUNT NELL AND AUNT JANE / THE LLOYD-JONES SISTERS / FOUNDERS OF THESE BUILDINGS 1886 / THE FRANK LLOYD WRIGHT FOUNDATION / IN LOVING REMEMBRANCE 1932.”