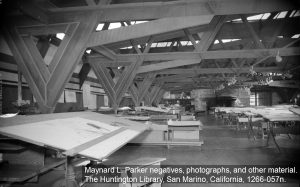 The Hillside Drafting Studio on the Taliesin estate in 1955. This was Frank Lloyd Wright’s main drafting room in Wisconsin after World War II. This photograph was taken by Maynard Parker for “House Beautiful Magazine” and its November 1955 issue was devoted to Wright. The collection of Parker’s photographs is in the Huntington Library (which can be accessed online and include photographs of many Wright buildings including Taliesin).

Kate Kelly shares Martin Longseth’s memory of building a doghouse while his parents worked at Midway Barn on the Taliesin estate in the late 1940s. Frank Lloyd Wright saw the doghouse Longseth made about 8 years before Wright designed one himself for Jim Berger (known as “Eddie’s house”). americacomesalive.com/2019/05/25/frank-lloyd-wrights-inspiration-for-a-doghouse/

This article discusses Wallace Cunningham, an apprentice at Taliesin from 1977-1978, along with one of his buildings and philosophy: architecturaldigest.com/story/cunningham-article-042008

DISCOVERIES AT TALIESIN THIS WEEK:

I am currently researching the Little Kitchen at Taliesin—the original kitchen at Wright’s living quarters. It was Taliesin’s only kitchen until about 1915. The kitchen went through a flurry of changes in the 1940s. According to former apprentice Curtis Besinger, these changes were made in anticipation of a planned visit from Wright’s client Solomon Guggenheim and his curator Hilla von Rebay early in the history of the Guggenheim Museum commission.

The biggest change at the Little Kitchen involved pushing the wall of the kitchen north; ending the room in a hexagonal window; and inserting a skylight into part of its new ceiling. Besinger shared with Taliesin Preservation a note to John Geiger (also a former apprentice) explaining Wright added the skylight to persuade Guggenheim his museum could be adequately lit from above.

Additional research on modifications to the Little Kitchen include information on Wright’s decision to close up a door on the kitchen’s east wall. That door went into the adjacent room, Taliesin’s living room. It was revealed while closing up the door—which was veneered with stone—a shelf was placed in the area perhaps to keep people from trying to open the (now nonexistent) kitchen door. The door to the Little Kitchen was changed to what had been the formal front door to Taliesin—and is still used as such today. View that part of the living room in a photograph from Maynard Parker’s session at: hdl.huntington.org/digital/collection/p15150coll5/id/20023/rec/3