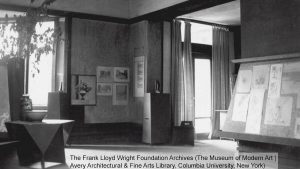 Wright encouraged his architectural apprentices to make objects, some of which were for sale. Apprentices gave tours to the public initially when the group started, which included a stop in the Dana Gallery so the public could see the pieces the students produced. [Property: The Frank Lloyd Wright Foundation Archives (The Museum of Modern Art | Avery Architectural & Fine Arts Library, Columbia University, New York).]

“What We Did Not Learn From the Bauhaus“: The Bauhaus opened on April 1, 1919 in Weimar, Germany. Frank Lloyd Wright’s Taliesin Fellowship formally began on October 2, 1932. All indications are that Wright was not influenced by the Bauhaus in the creation of his endeavor. President of the School of Architecture at Taliesin Aaron Betsky writes about the underlying philosophy that links the two.

Learn more about Don Erickson who apprenticed under Wright from Nov. 1948 to April 1951: chicagobauhausbeyond.org/architects-designers/name/don-erickson/

WRIGHT RESOURCES FOR YOUR LIBRARY

MAGAZINE ISSUES ON WRIGHT AND TALIESIN:

“How Fresh and Fitting is the Furniture of Frank Lloyd Wright in Traditional Rooms” (June 1956).

“Our Strongest Influence to Enrichment” (January 1957).