One lane of the Highway 23 bridge will open on Saturday, June 12. Highway 14 will also be closed in Mazomanie, please allow extra time for this detour. See the hours and directions page for more information.

At Cadre in Madison, Evan Dannells leads the charge, but the last thing he wants to represent is a figurehead. In 2017, he paired up with former mentor Odessa Piper of L’Etoile (and the FAIP program) to chef Taliesin Preservation’s Shining Brow Awards Gala. Now with Cadre, Dannells draws from years of experience in the Madison restaurant scene to build an operation that celebrates seasonal cooking and local ecosystems in southern Wisconsin. It’s a venture that he hopes will bring together the diverse voices of Wisconsin cooks, growers, and eaters, and live on to evolve and bloom beyond his direction.

With people slowly returning to Cadre’s dining room as Covid-19 restrictions ease, I sit down with Evan and Cadre’s General Manager Colton Schara — whom Evan credits as the storyteller
behind Cadre’s vision — to learn how Cadre is using the lens of French terroir to ignite a greater appreciation for Wisconsin foodways.

Give a quick refresher on your experience as Taliesin Preservation’s Shining Brow Awards Gala chef.

Evan: My experience as the gala chef was probably a little different than everybody else’s. We did the first one — I say we because I did it with Odessa Piper. She and I built the menu together and it was really a lot of fun because anytime you’re doing a large gala event, there’s a certain aspect of it that is logistical in nature and you want to hide that. Nobody wants to see how the sausage is made. And, so we came up with a menu that I thought would be able to serve 250 people and still be very good, while also trying to pass it through the lens of what I know Odessa loves. It was amazing to me how easily she and I managed to put a menu together because I hadn’t worked with her actively in well over 10 years.

How did Cadre come together?

Evan: After I left Merchant and Lucille, I knew that I wanted to run my own restaurant again. I had a vision for a very collaborative place where everyone has a voice that I don’t feel like a lot of restaurants have. A lot of it was a waiting game — waiting for the right opportunity in the right space. It kind of fell in my lap to take over Oliver’s and buy the place from the previous ownership and turn it into something else. There was no way that I could say no because I really truly love this neighborhood. The kind of people who want and appreciate what we do here at
Cadre live close. I very much wanted to get away from a lot of the “trend-dining” and circle back to the early part of my career when I was working for Odessa and reconnect with doing classic French, which was my initial culinary love, passed through the lens of Wisconsin, which was what L’Etoile was all about when Odessa was the chef. I felt like that was a void that has existed in Madison for about 10 years now and that we could fill that…That’s kind of the beauty of why I’ll never leave Madison is that Madison is where we’re just a big enough city to be able to do just about anything, from a food perspective, but we’re also still in the heart of farm country and this amazing local organic farmers movement that has existed for over our lifetimes. I don’t think there’s anywhere else in the country that you can have the kind of local organic farming support that you can have in Madison. That’s why I think our culinary game is significantly more advanced than the size of our city. 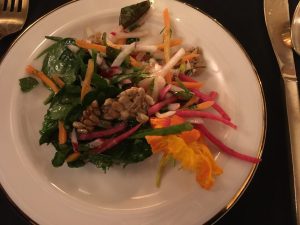 I don’t think there’s anywhere else in the country that you can have the kind of local organic farming support that you can have in Madison. That’s why I think our culinary game is significantly more advanced than the size of our city.

Colton: I think this is your entire career leading up to this…after you were finishing up culinary school, you had the opportunity to do an internship and you chose to come to Madison to work for Odessa because you knew that she was committed to local agriculture.

Evan: That is true, I guess I was only looking at the last six months. I mean, for most chefs, I think the goal is to eventually have a vision come together, even though we spend years or decades with it; it might be hanging out there and might be a little nebulous or, as years and time and services and new restaurants go on, I think it changes a little bit, but I think I had something close to what we’re doing now percolating in my brain for at least 10 years.

In terms of the restaurant’s concept, what story are you aiming to tell with your menu and
dining environment?

Evan: That is a Colton question.

Colton: When it comes to Cadre, his love was French food. A lot of threads of that are still in what we have now, with more bistro-style food including some of the classic dishes, bouillabaisse, beef bourguignon, things like that. But this last year, we had a couple of instances where we had to do things differently during COVID. When we opened last summer, we had a prix fixe menu and tried to only focus on getting what was in season at that moment and only ordering what we needed. So there was never any waste. If there were any ingredients that were unprocessed, we would find ways of preserving them and using them later. So the prix fixe menu was really great and surprisingly inspiring. And it was breezy, it was easy to do it. And our guests actually loved it. They loved the fact that the menu was changing with the seasons and we loved telling the story about where we were getting things. During the winter, though, we knew that we were going to have to transition to takeout and it was going to be difficult to do French food. Once it got cold enough, we started doing braised meats, and I picked up Robuchon’s regional French food book. He breaks down all of France into a number of culinarily distinct regions. I use that a lot to get ideas for menus and learn about regions and culture. Just the same as within Wisconsin, there are certain places and unique geographies that make different ingredients possible and different seasonal schedules possible. The same thing in France, depending on elevation and terrain, and water features and whatever else, and also just the people who live there. So it was really interesting learning about the distinct cultures that are even within France and the history of them, and how we could possibly adapt some of those ideas to Wisconsin. Wisconsin is also at a very similar latitude to France. In some places, we have a similar climate and in other places, we do not. That’s what makes us unique. We saw these common threads that went through the whole country of France, different ideas when it came to food and how to process ingredients that showed up in places that were not really related — not related culturally, not related linguistically, or whatever. But we noticed that these common threads just made sense. And so I think it’s trying to find some of those common threads in French food, and how they process ingredients, and how they eat and trying to adapt it to Wisconsin.

Evan: I just want to follow the growing season and that ends us up with flavor combinations and certain types of things that are actually distinctly Midwestern. And, then we try to figure out a way to put some French play on it.

The idea that Cadre follows the connections between seasonality in Wisconsin and France is a really interesting concept. This seems like such a responsible and sustainable way to ground a global cuisine in a different locality. Did you think about it this way?

Evan: It was very organic because that’s what I’ve been doing for so long. When the growing season starts, I don’t have to make initial graphs. I can’t help myself, I want to be working with what’s fresh. The idea of being married to a concept and having the produce be secondary is just so foreign to me because I want to start with the product. And so I think even if we had a plan to the contrary, I’m sure I would have mucked it up. I’ve spent so many years just following Wisconsin’s growing season that I don’t have to follow a list to know when things are in season, I just know. I’m French-trained and French food is my favorite. So I always find a way to make everything a little bit French, I think you can get pretty close with France most of the time.

Colton: And I think we’ve accepted that Wisconsin’s climate is changing.

Evan: That’s the other problem. I’ve watched our growing seasons shorten significantly and change a lot. We’ve had years where it rained so hard that tomato blight set in shortly after the season started. For a lot of farmers, especially market farmers, tomatoes are a cash crop. We’re definitely seeing more weather extremes. It will probably make this a little harder to do as time goes on, but we’re still finding it and it’s still really organic. We have the benefit of working with a lot of farms like Driftless Organics, or Vitruvian, or Elderberry Hill Farm where they all sort of have a dedication to permaculture and they’ve all done a good job of adapting to our climate changes. And they’re all young and hungry. They’re the new generation of farms that’s willing to go out there and try things.

How do you see Cadre fitting into the ecology of the Southwestern Wisconsin food and
culinary community?

Colton: Evan, for years, was trying to find those places, those hubs, those nodes, whatever it was where local food was important and the systems were in place. I think one of our biggest focuses
for the near future is to start talking about the Wisconsin element of our restaurant — talking about where we are sourcing our ingredients. Who are the farmers? What’s going on with the seasons? I think that’s the knowledge that Evan implicitly has, but we want to try to package that up and explain it to our guests. Food is a microcosm for everything; I want our guests to start understanding when they look at that food on the plate, that there’s a much bigger story that needs to be told. One of the things we’re looking at doing right now is a project where we interview farmers and do some site visits, learn a little bit more about the farmers themselves, about what they make, and the techniques that they’re using, and then try to share that in an engaging way and make it something where the public can view it, access it, and then also comment on it. I think for me, it’s an effort to record that information for history. I try to remind Evan all the time that what we are doing right now — every news story, every interview — somebody will find that in the future and use that to help reconstruct the past of food. 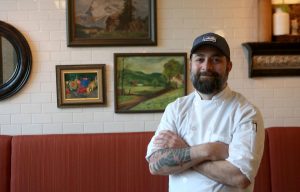