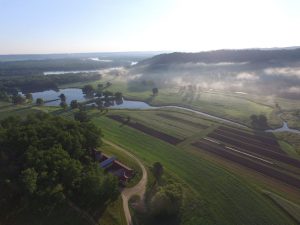 Once again this year, an interesting array of crops is being grown on the Taliesin estate by the Zimmer family’s Otter Creek Organic Farm, which leases the farm land.

On the east side of Hwy 23, the top strip is sweet corn. This will be harvested for freezing or canning. The lower strip closer to the road has been seeded down to alfalfa—a forage or hay crop fed to livestock. And the small triangle-shaped piece of land on the northwest corner of Highways C and 23 is a test section of pumpkin, an experimental project which will result in harvesting the seeds for human consumption. Plus another sustainable benefit is the plastic strips used for weed suppression are biodegradable.

If approaching the estate from the west side of Hwy 23 (and south of Hwy C), more rows of planted sweet corn are visible that later will be canned or frozen. The field to the west of the big curve near the intersection of Highways 23 and T is corn allocated for grain.

On the former John Lloyd Jones farm—also known as the Hoyer Farm for its last resident—is a large white farmhouse and red barn on the south side of the neighboring highway in addition to an acreage of yellow peas, a delicious protein crop. Other areas on the estate are sown with rye slated for whiskey distilling plus feed for organic chickens. Separate fields set for harvest in early September such as sweet corn will be seeded down with winter rye this fall.