Architect Frank Lloyd Wright believed deeply in the power of geometry, and through the Taliesin Fellowship program, he passed his knowledge on to his many apprentices. Wright’s beliefs regarding the geometric form as a cornerstone of architecture can be seen clearly in the work of one apprentice in particular: James Dresser.

Dresser studied under Wright in the 1940s and would become a well-known architect himself, having his work featured at various times in both local and national publications.

Not only did Dresser find inspiration at Taliesin, but he also found his wife: Barbara Fritz, sister of Herbert Fritz, Jr., an earlier Wright apprentice, married James just three months after they met, with Wright himself giving away the bride. The union lasted sixty-four years until James’s death on January 23, 2011, at age eighty-five (Barbara died on August 13, 2020).

Dresser’s work took the couple as far as Arizona and Tennessee, but a good portion of his commissions are concentrated in Wisconsin, where he set up his practice in Lake Delton. The architect is known to many locally as the designer of The Del-Bar and Field’s at the Wilderness, both supper clubs in Wisconsin Dells. 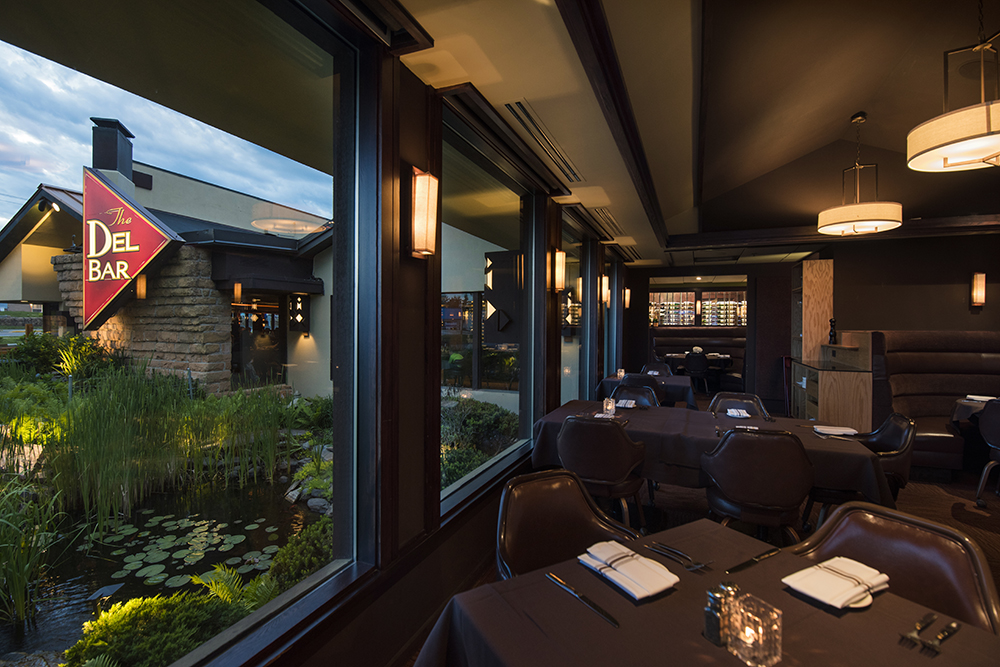 The Del-Bar features strong geometry in its design, with the triangle as a repeated element, including on the sign out front, which literally points diners into the restaurant.  The building’s construction materials also reinforce its connection to nature and the prairie. Exterior stone walls continue inside, giving way to large expanses of glass. The warmth of another natural material, wood, harmonizes with the earth tones of the restaurant’s color palette, which can be found both inside and out.  Another design principle James absorbed from Wright, the use of compression and release, is easy to see and feel at the Del-Bar: Intimate, low-ceilinged spaces open to larger, soaring expanses. 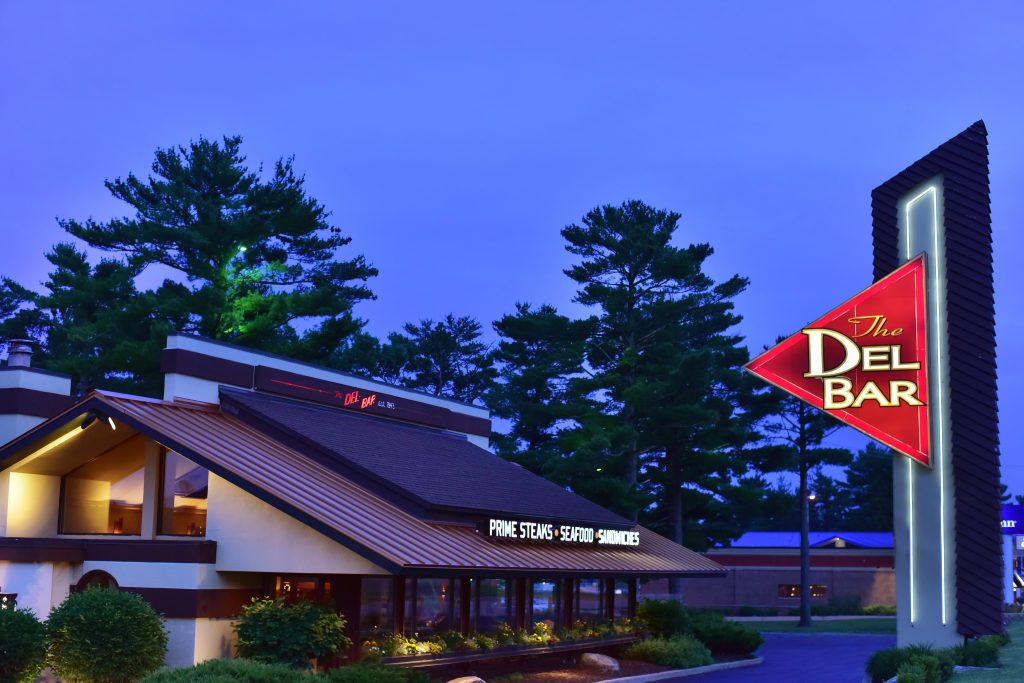 Like the Del-Bar, Field’s at the Wilderness employs many of the classic stylistic elements that Dresser studied during his apprenticeship with Wright.

The triangle is an essential feature at Field’s as well, and is evident in the roof—a heavy, angular structure that visually anchors the building to the ground. The restaurant sits at the water’s edge, and landscaping reinforces the building’s connection to nature. Glass, stone, and wood are prominent features that blur interior and exterior spaces. The effect is heightened by interior water features and tall palm trees in planters.

The principle of compression and release is at work here, too, with low-ceilinged spaces opening to an atrium that reaches a height of thirty-six feet. Earthy colors and warm lighting contribute to the atmosphere, as does the Prairie-style font of the restaurant’s signage and branding. 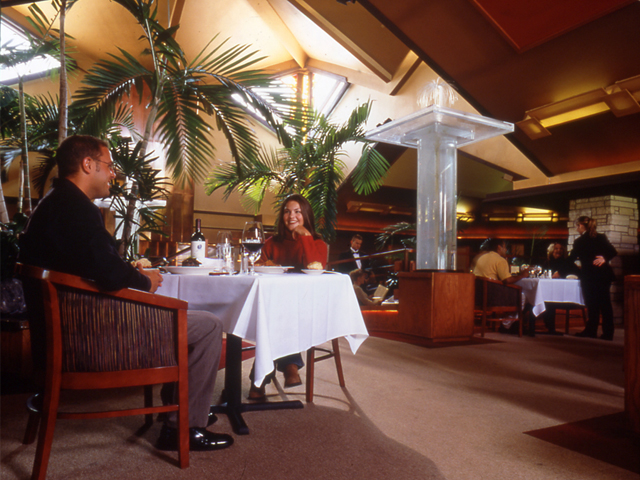 Courtesy of the Wilderness Resort 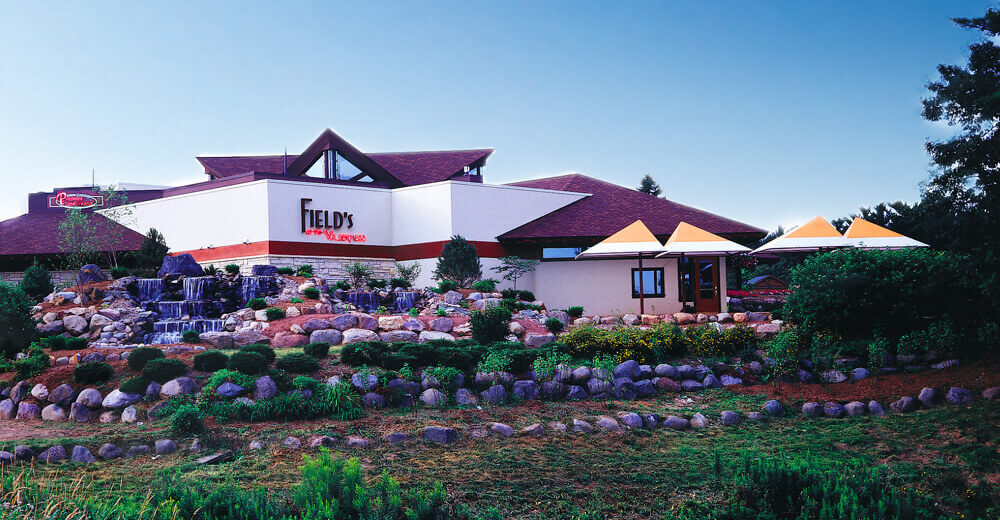 Courtesy of the Wilderness Resort

The Lake Geneva Public Library (1954) in Lake Geneva is another of Dresser’s designs. An angular roof shelters this architectural gem with wide, overhanging eaves.

Beneath the highest roof peak is the building’s central section, each end framed by windows trimmed in dark wood forming geometric patterns. The main entrance is accessed at the front of this section, while the lake’s views can be enjoyed at the back. Bands of glass emphasize the building’s horizontal lines and provide other expansive views of the lake outside, inviting patrons to sit and read while soaking in nature from the low-ceilinged space. A large, brick chimney appears to pin the building to the ground. The brick continues inside, further blending the exterior into the interior. 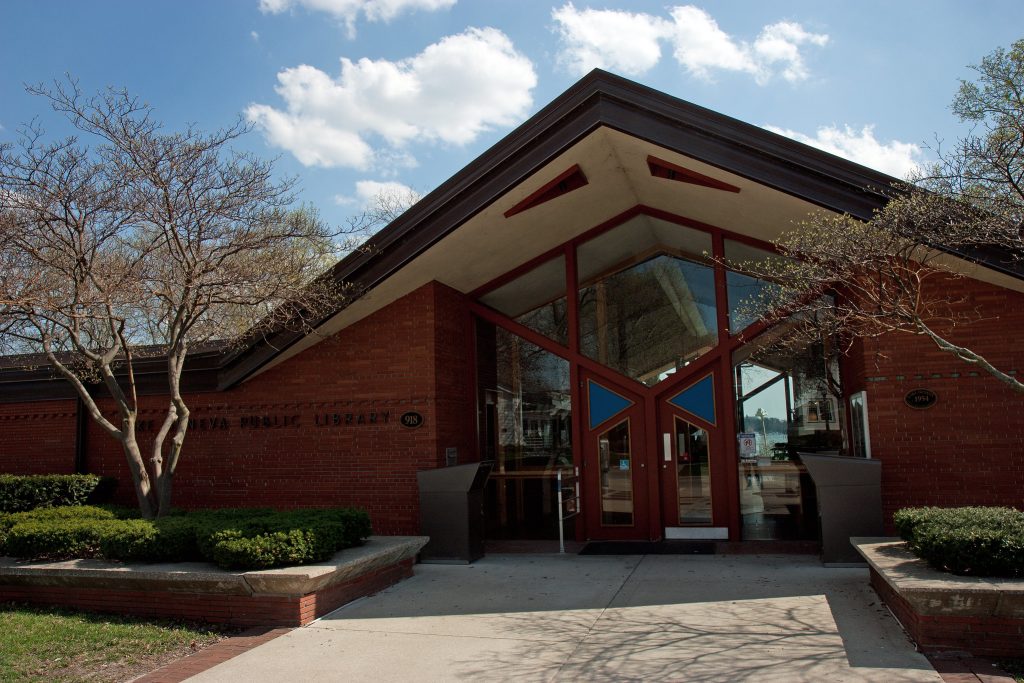 Another geometric form that Dresser worked with frequently was the circle and its cousin, the dome. Several circular designs can be found in his portfolio, including commercial and residential commissions, some of which even incorporated circular rooms.

Dresser’s design for the Gonstead Chiropractic Clinic (1964) in Beloit is an example of his use of the circle. Like a set of interconnected rings, the building is semicircular in shape, with a flat, circular roof that sits at an angle, creating a clerestory window on one side of the building. Large windows direct those inside to views of the landscape outside.

In addition to the glass, stucco and wood are the primary construction materials. Circular forms are repeated inside, with pod-like examination rooms, curving hallways, and a circular reception desk.

Dresser designed his own home, built between 1952 and 1953 in Madison, using the circle and the dome as prominent design elements. Aptly referred to as the Sunflower House, the home’s geometry reflects nature: A domed roof punctuated by triangular windows is sheltered by deep, steeply pitched overhangs. Wright, an early proponent of cast concrete, undoubtedly influenced Dresser’s choice of concrete as a roofing material. The concrete shell weighing twenty-eight tons is supported by steel beams recycled from World War II-era Quonset huts.  Dresser chose the circle for its efficiency of cost and design: A circular plan provided the most usable interior square footage in the least amount of exterior wall needed. The residence is partially nestled into an earthen berm surrounded by trees, a true marriage of a structure to its site. Brick forms the lower walls, and much of the interior is finished with plywood, another material Wright embraced soon after its introduction. A circular kitchen stands at the heart of the home, lit by a skylight of six triangular glass panels. Planters also ring the kitchen near ceiling height, further reinforcing the home’s organic character.

It is easy to see how James Dresser’s work carries forth the legacy of Frank Lloyd Wright. Dresser’s designs represent not a mere imitation of Wright but an adaptation of his philosophies by an architect of the next generation. Dresser approached Wright’s philosophies from his own perspective, built upon them, and added his own stamp to them while maintaining the architectural grammar that is such a part of the region.